I have known Kristian McPhee through the parkour community for sometime we have mutual friends that run in similar circles. Upon hearing that he was going for and made into the GB weightlifting talent squad (A development team for up and coming weightlifters), I had to get in touch to ask about his experiences in the program and his aspirations as a weightlifter. 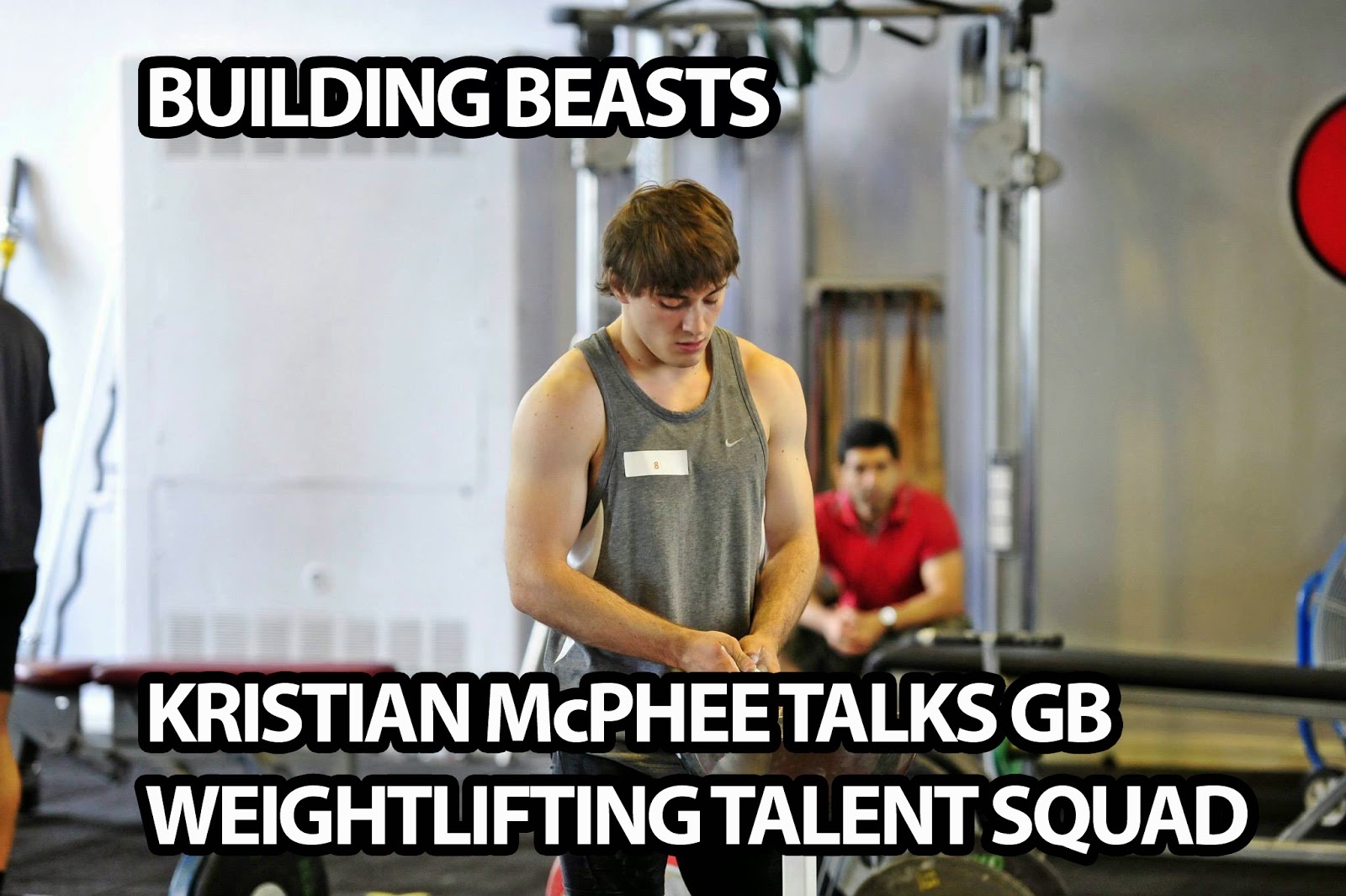 Tell us about yourself Kristian how did you get involved and weightlifting and what led you to the talent selection squad?

Quite a bit of a life story in how I ended up weightlifting. So I was originally training Parkour/Freerunning for 8 years, I’m still involved as I teach and was originally on the performance team for Parkour Generations but since January 2013 I dedicated my focus on weightlifting. However back to the story, in 2008, after a bout of tendonitis and struggling to improve my jump I started to back squat and deadlift with a few others like Bobby Gordon Smith.

Bobby became really interested in trying Olympic weightlifting as we had heard they had huge jumps. I went down to crystal palace late 2010 but was too far to carry on. However I went to watch Bobby at a competition and got introduced to Mike Pearman (my coach) who was running a club at Brunel which happened to be 5 minutes away. So I officially started Olympic weightlifting September 2011. From that time I was still training Parkour heavily and doing performance work and trying to learn to weightlift twice a week. My first weightlifting competition I had just come back from 5 days in Birmingham doing rehearsals, then I had the competition on the Saturday, on the Monday I flew out to Paris for the Parkour job. Training goals felt horrendously schizophrenic and I started to fall out with Parkour over the reasons I was doing it, it no longer felt like I was training for myself and I wanted to put what discipline and determination I had got from Parkour into weightlifting. 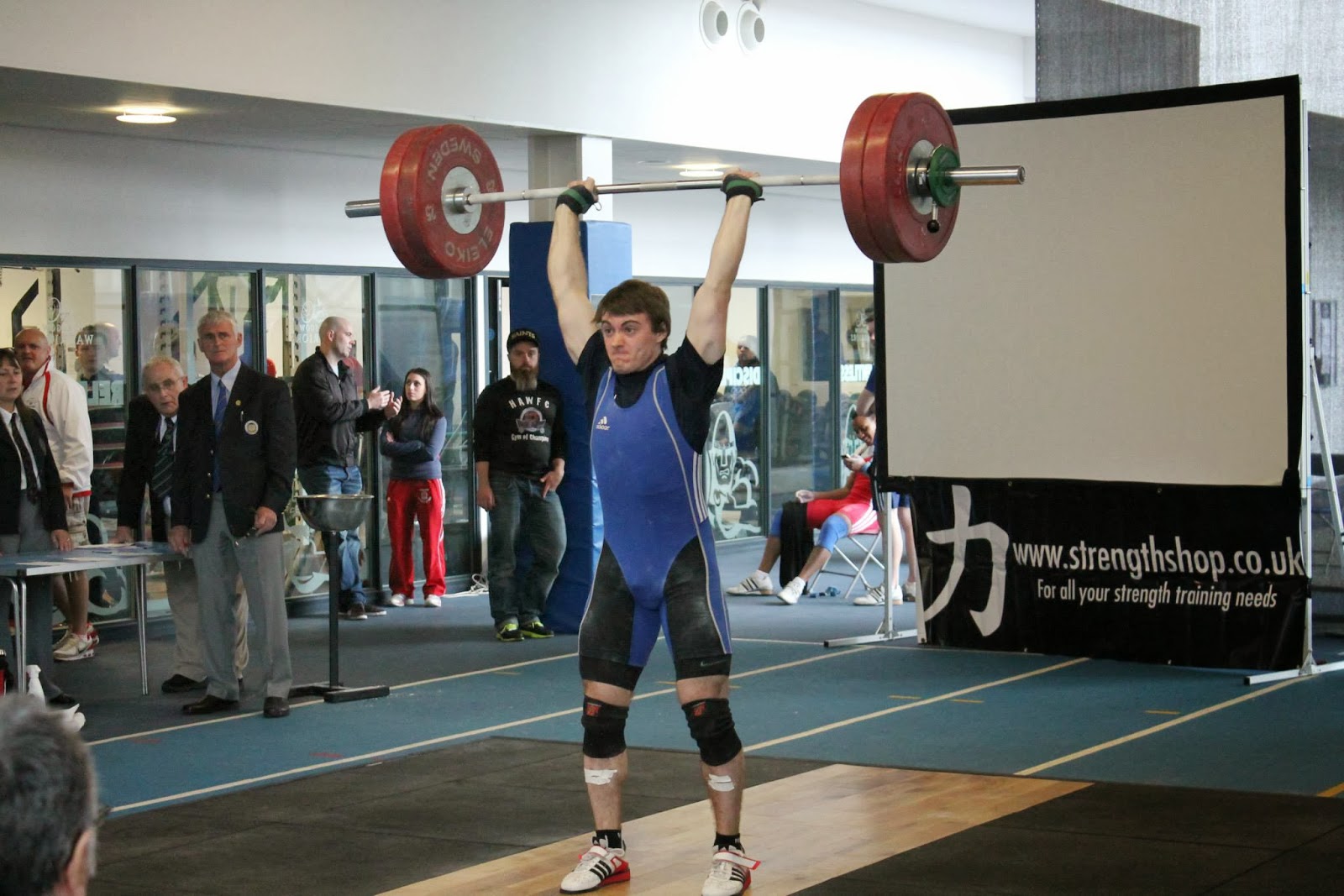 In June 2013 British Weightlifting were extending their talent selection program for athletes 23 and under (I was 21 at the time) and simply signed up to the talent day and went down on the day…which happened to be my birthday. Any help available to help me reach my goals I will take with opens arms!

What does the selection process involve?

The sign up is a simple online screening which asks about your sporting background and how long you have been training, it even asked if I had any athletes in my family. On the day, you immediately get measured up, height, arm length and grip strength. We then had a series of tests such as standing long jump, standing vertical jump, 10m and 30m sprints, medball throws, empty bar overhead squats and front squat (I am not very good with the bar). Those selected then carried on to the next phase up in Leeds which involved similar physical tests but also full lifting session and physio screening. A few of us were selected onto the GB talent squad, others onto the England talent squad and the rest onto the regional squads. However at the end of the year totals have been introduced into the squads so I need to earn my place on the GB talent squad. 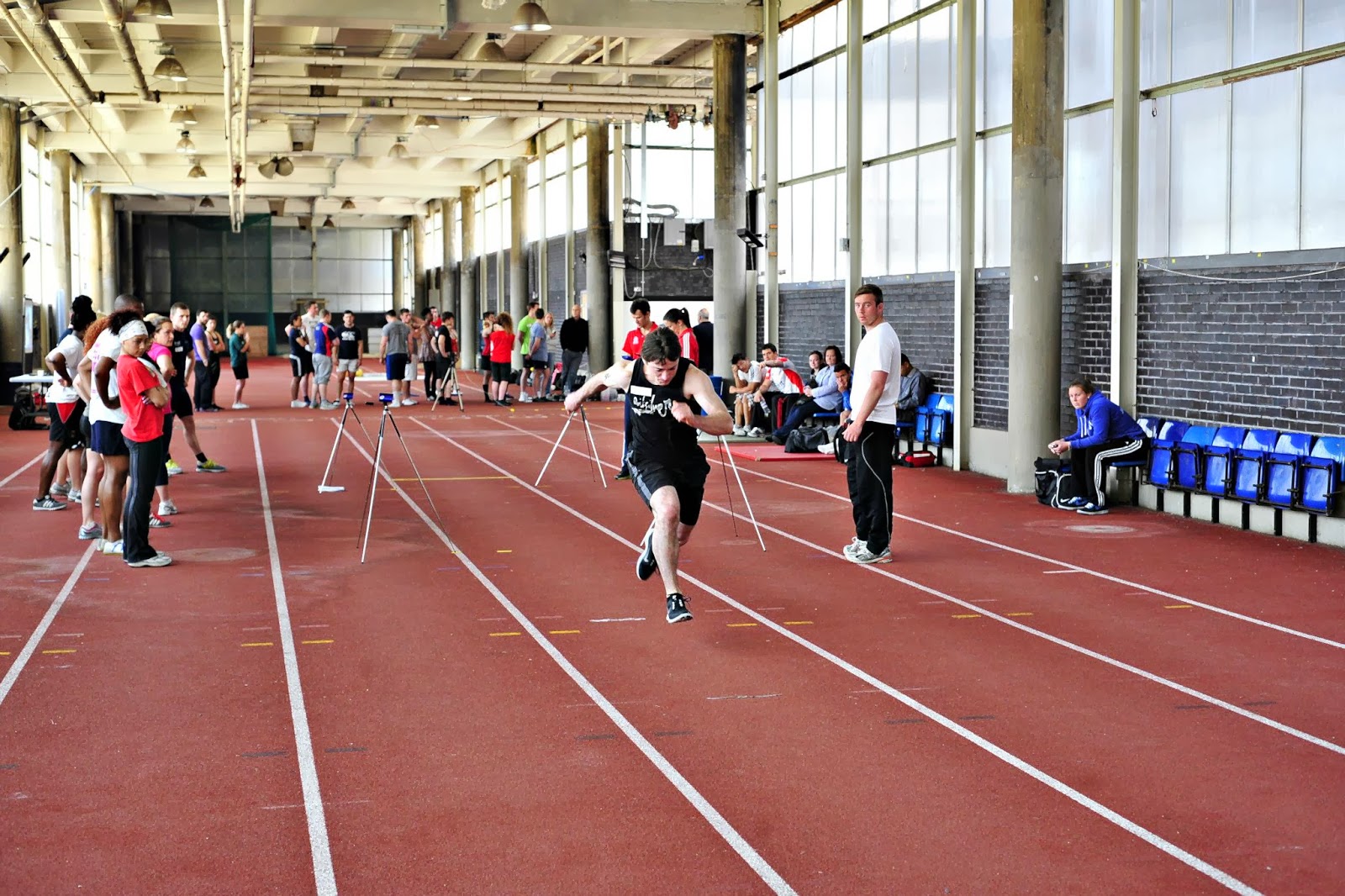 However it’s been announced that UK sport will be ending their weightlifting funding, and giving it to other sports that already have a fair amount because they have better chances of medalling in Rio and Tokyo. Sport England fund a lot of development so it will hopefully not disappear as the development squads have been extremely helpful to many lifters and given achievable progression windows between stages.

What is the daily life like on the talent squad?

We stay at the Carnegie halls in Leeds Metropolitan University, which is about 2 minutes’ walk from the gym. My sleep pattern is awful so waking up at 8.30am is fun…Anyway, I have the first of my three showers. For breakfast, they provide all the food for the camp so it’s all good stuff, oats, bacon, eggs, a lot of milk as the lifters tend to drink it non-stop. After breakfast we head down for the gym to start lifting at 10am so I usually warm up for around 30-40 minutes, which is heavily encouraged to roll, mobilise and get warm even though some of the other kids are supple 14 year olds. The morning session is intended to be your own program but a lot of us tone it down as we have a tough afternoon session coming. We head back around 1pm for lunch, then I have an hours nap, shower and then head to the gym 4pm. The morning sessions really helps reduce the amount of mobility needed. This session is 90%+ in both lifts, usually followed by squats. It is in this session many lifters try to go for a personal best as the environment is quite conducive for it. We head back for dinner, which is chaos unless we have designated chefs. There is often a talk squeezed in at some point, either on sport psychology, nutrition, anti-doping. We often watch back lifts from the session and just relax in the living room, roll, shower (the third one) till about 10/11pm and head to bed and force myself to sleep so I can train well the next day! 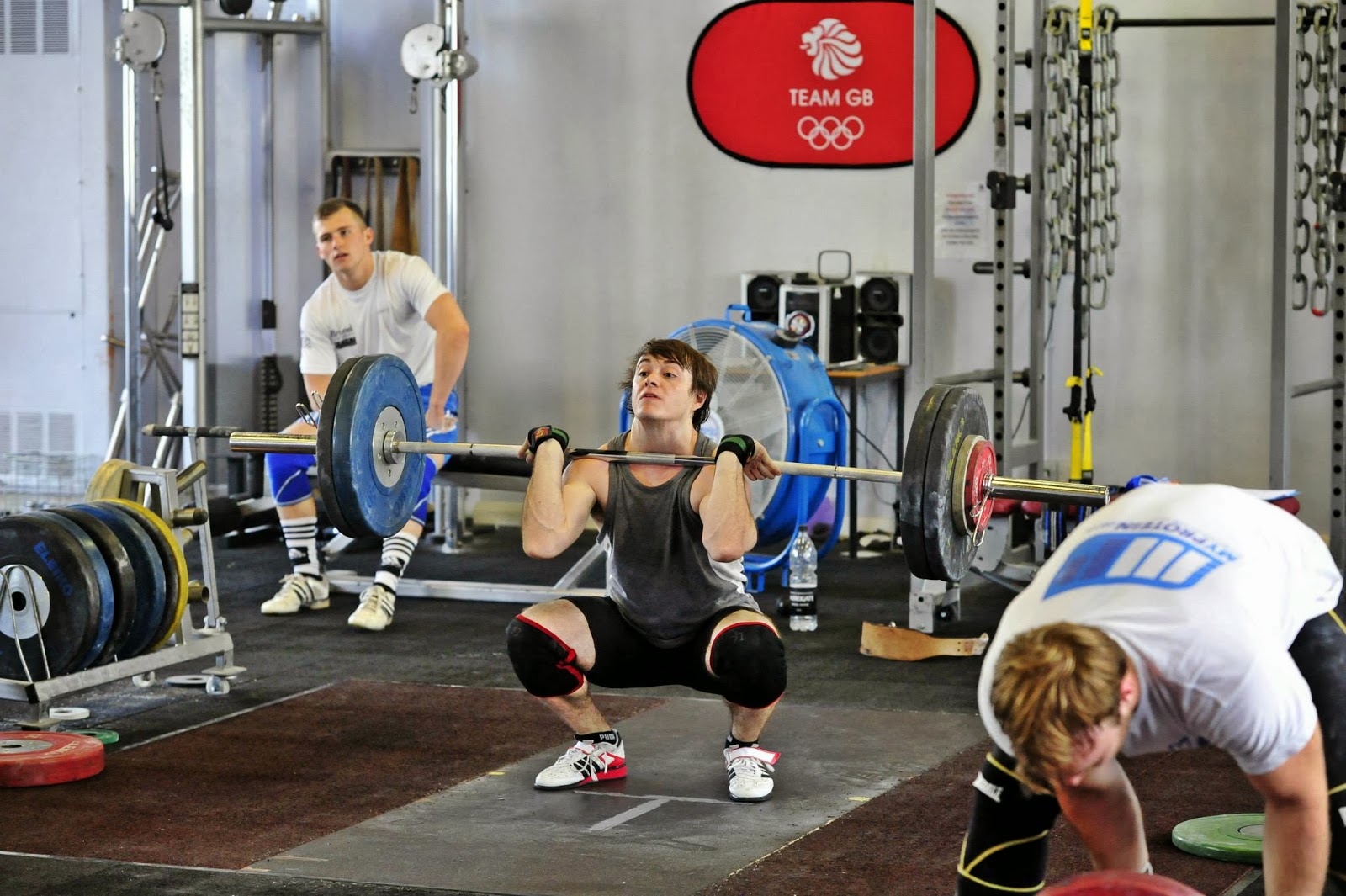 Can you give us any insight into your programming?

I’m a bit of a strange one when it comes to programming. I have had so many weaknesses (and injuries) that have made it hard to use a ‘cookie-cutter’ program. My current program was made with the help of Jack Oliver. My coach is the England commonwealth squad head coach and has coached national teams for many years as so I think he is used to lifters who are already good and [dangerously] trusts us to sort it out ourselves but the talent squad head coach Sam Hayer is there to help us with programming.

My snatch and jerk are my weaknesses so my program revolves around improving them and maintaining my clean and squat strengths. Tuesday was my clean and jerk session, Wednesday was a light session with powers, Thursday is my snatch focused session, Friday rest, Saturday snatch and clean and jerk but variations such as from hang or block. Sunday is my strength and condition session followed by sauna and plunge pool, Monday rest. My programming follows the Russian style in working around 70-80% for reps (5 sets of 3 for example) to prevent overkill of my nervous system and taking the assistance exercises seriously. Since I was injured in a road accident and this caused me to tear my adductor tendon as I tried to carry on training with a destroyed hip, I have had 6 months of struggling to do the full lifts. So I could only really do the assistant exercise properly such as pulls, push press, snatch push press, core and shoulder strengthening and they have really carried over to my lifting. Like most rookie lifters we think we can come in and do a Bulgarian style training program with no assistance, and max out on the lifts. This works for a short time but most crumble eventually.

What about nutrition and supplements?
When I was only training twice a week I didn’t consume much in the way of complex carbs. A lot of protein, veg and dairy. While I felt like I had a lovely consistent insulin levels. I really struggled to feel strong when I began to train more than three times a week, let alone recover. I slowly introduced sweet potato and rice into my meals and have a huge benefit to my training. I usually have eggs on rye bread with avocado for breakfast and then simple lunch and dinner meals with meat, vegetables/salad and rice/sweet potato. And some greek yoghurt and fruit for dessert. Supplement wise I consume whey after every session, I take fish oil, multivitamins, glucosamine, ZMA and the past few months have been taking tribulus (placebo or not!).

What weightlifters past or present do you admire?

Huge fan of Zlatan Vanev from Bulgaria for his unbelievable power. Others like Georgi Markov, Galabin Boevski, Idalberto Aranda, Lu Xiaojun and Ivan Chakarov. As well as the GB weightlifters which have trained in a sport which had very little (if any) support and still produced big numbers. Also big respect for countries (like Germany and Canada) with strong anti-doping procedures and still manage to place highly in the world championships.

Is their much camaraderie between the GB talent squad?
There is a large age difference in the team but doesn’t really matter as all weightlifters are pretty mad. A lot of joking between each other and a lot of boy banter as you would expect. Unless we are going heavy, training is a fun atmosphere, with only 3 reps to do and 3 minutes rest you’ve got to keep it fun with all that rest! We are all looking forward to watching each other lift at the English Championships this weekend as we all want to see British Weightlifting move forward.

As a young athlete what are your aspirations lifting and career wise?

My first large goal is to compete internationally which currently means a 291 total at 77kg which I believe I can hit. If I have seamless progress then squeezing into Rio would be great if we actually get any spots. And an ongoing joke in training is to be able to clean and jerk 200 so if I did that I would die happy.

Any closing thoughts?
Thanks for the interview. I hope by being open about my training I can help others. Believe it or not Will Wayland was the first man to introduce back squats to the Parkour community…so Wayland got me into weightlifting.