In this post I’ll run over my experiences over the past 3 years adapting the Triphasic Training method to my needs.

Back in 2012, through the repeated postings from Donnell Boucher of Citadel Strength and Conditioning my attention was drawn to Strength Coach Cal Dietz’s novel method of addressing the cross-over of eccentric, isometric and concentric work. For a years, I struggled to reconcile training modalities such as eccentrics, isometrics, post activation potentiation (PAP) and stress manipulation. Along came Cal Dietz, who set out these concepts into a systematised method ‘Triphasic Training’ that really makes sense. Prior to Triphasic training I followed a rough 80%+ and 80-55% peaking method using a combination of olympic lifting and powerlifting. I would often run methods some what concurrently, but switching to triphasic training, I returned to the older block sequence system. Targeting a particular training quality in sequence, means that it is rapidly obtained and easily adapted again when detrained. Rather then serving training stew I started serving steak.

Tweaking the method
My first obstacle was this I had to try and fit a lot of intensity into 2 days which is the most many fighters can spare for S&C. The ‘Tripasic training’ method is built around 3-6 day programs. The book does have a 2 day in-season model. But for my main clients who are MMA fighters and grapplers the stimulus wasn’t enough so with manipulation of intensity and exercise selection I made changes which seemed to suit MMA fighters. Mainly things like heavy split squats and very heavy hex bar pulls, which gave us all the intensity and stimulus, but none of the negative stress that comes with other movements. I wrote about his here for Fight Camp Conditioning.

I wound up with something resembling:

Digging those Eccentrics
As a result of exploring the method I learnt a ton more about using Eccentric and Isometric components in training and have modified it work with my athletic population.

Eccentric training in particular is the red headed step child of movement tempo’s, they are hard mentally, neurally and induce a lot of soreness which was a primary reason many coaches have strayed away from usage. The worry being that soreness will impact technical practice. Research has however been extremely positive recently on the benefits of eccentric training. Soreness can be worked around provided training is sequenced properly, plus we now know that the first session brings a stress response that protects us against subsequent soreness. Eccentrics have now been shown to improve change of direction capabilities, decrease injury risk. Eccentrics have also been shown to improve total strength and muscle mass to a greater extent than concentric’s alone. This is nothing new however eccentrics have been used for 70 years+ the mechanisms are now becoming better understood however. Dietz makes eccentrics the key starting point in triphasic training, as almost all powerful athletic movement will have an eccentric initiation. More powerful eccentrics = more powerful concentrics.

I’ve been breathing down the necks of fighters and crossfitters to do way more eccentrics, as it improves force absorption a ton which is why we see lower injury rates in eccentrically strong athletes. Eccentrics are great for grooving technique in beginners and learners, going slow forces them to get things right.

Isometrics
Isometric training is the other novel facet of triphasic training. It stands as the transition between eccentric and concentric muscle actions. It makes absolute sense to train it. It seems to lead to tissue adaptations particularly in the tendons. It also improves motor unit recruitment providing an increase the number of muscles fibers that fire. And rate coding which gives an increase the rate at which each fiber fires, which increases muscular tension. We are now seeing evidence it improves torso stiffness and even cardio pulmonary health. What we do lack however is optimal duration for isometrics, this however is governed largely by failure to sustain alactic energy system especially when using heavy loads so there is an argument to keep it under 10s. This comes in as the second block when running the triphasic training method.

Concentric and Power Work
What also spiralled out of triphasic training’s concentric work for me is the number of ways you can improve quality concentric muscular actions by paying respect to energy systems and neurological factors. Dietz mentions for instance 5×3 at a given percentages will always look better than 3×5 at the same percentage.

From this has spun out a number of methods I now use for concentric training and high velocity training.

Death Ground Squats – A 90%+ Velocity Based lifting using speed as m/s or time to regulate the amount of work done. http://www.powering-through.com/2014/02/death-ground-squats.html

High velocity peaking and Timed & Oscillatory sets – 55% High velocity methods that respect quality and time and anatogistic inhibition as means to creating more powerful athletes. The idea being the best athletes are often the ones that can relax the fastest this is why movement turn over is crucial https://fightcampconditioning.com/high-velocity-peaking-methods/

Accelerated plyometrics
Strange looking at first using band assisted jumping. Coaches such as Cal Dietz and Kevin Argauer argue that typically, jumping movements are performed with added weights which cause an increase in the amortization phase. By deloading the movement with bands you can minimize ground contact time, while still allowing the athlete to produce a lot of force in minimal time. Dietz outlined the benefits of accelerated plyometrics in his presentation ‘Sub maximal high velocity peaking methods’. Read more in a post I did for fight camp conditioning. https://fightcampconditioning.com/accelerated-plyometrics/

I’ve also integrated elements of Dietz GPP method into my own. Prior to this my GPP approach was dominated by more conventional GPP approach being a mix of Aerobic and Lactic based conditioning methods. Much like with eccentric, isometric and concentric muscular actions we can break energy systems into their main factors and training them individually while still having a global conditioning effect (energy systems never work independently from each other). The big break from the norm is keeping athletes lifting which important if contact time is small and not hammering them with tracks prints, sleds, ropes and the like. Of particular note is alactic work that isn’t sprinting. Isometrics or timed sets with high loads to fill that energetic requirement.

I wrote a series on these earlier this year;

A better in-season method and between fight training plans

The basic gist of the in-season plan is below; 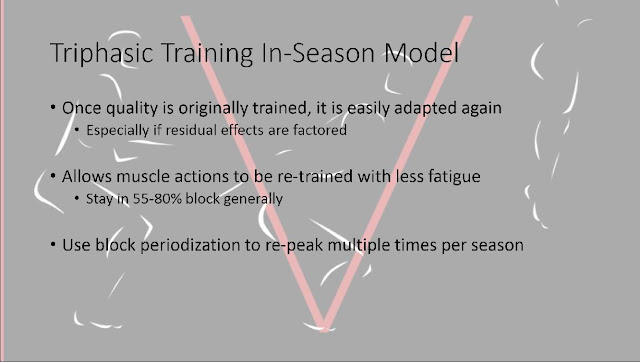 This has been of particular value to the golfers and skiers I work with. We’ll re-peak them multiple times in season as comp schedule and time permits. This is easy to do especially as they mature in training age and have spent a solid off-season hammering longer triphasic blocks. This also works well with MMA fighters where we we’ll have short intensification periods of 6 weeks at  80%+ eccentric, isometric and concentric periods, sometimes doing away the concentric and skipping straight to the power work with just eccentric and isometric work behind us.

3 Years on
What is important is that triphasic training encourages shift from the notion of linear development to one of an interplay of sequenced qualities that encourage long term improvement.

Thus far I have used the method with UFC fighters, Elite golfers, International Skiers, Powerlifters, Boxers, Superbike riders, crossfitters and even in a non athlete group setting. Provided you adhere to the program on principle based level you can adapt to just about anyone and any exercise. The other thing is that it has changed the way I train too.

Im still surprised one piece of source material can still echo through my methodology. I hav’nt reread a piece of material so thoroughly since Dan John’s Intervention and Vern Gambetta’s Athletic Development Book. Is it the only way to train? Of course not! I still apply other periodised approaches based on athletes needs, rather than to adherence to anyone training method. I do however believe that its important to focus on how your clients lift and not how much they lift. Because at the end of the day its about building strong, more powerful and faster athletes and I believe this is probably one of the best ways to do it. 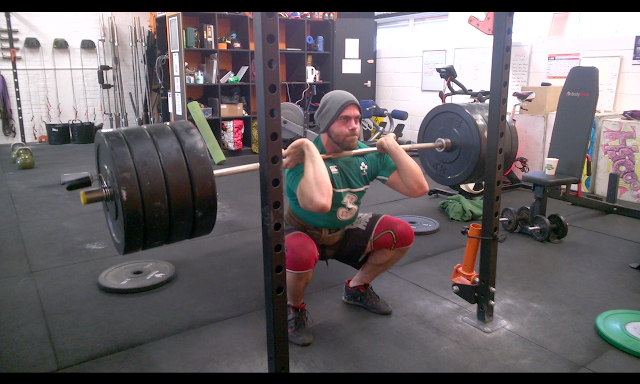 5 thoughts on “3 Years On Triphasic Training”